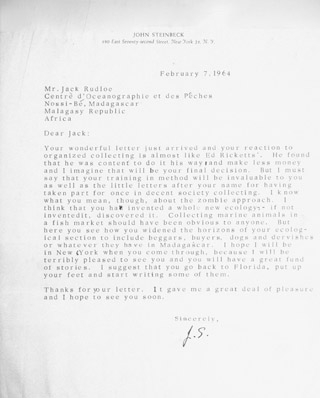 “Remember the Land of Oz?  Maybe we could help to colonize the World of Is.  It is more fantastic than the moon and littler known than Mars and it has the curious advantage of being here.”

In the winter of 1962 I began a correspondence with John Steinbeck, one of America’s most famous novelists.  Among his most noted works were The Grapes of Wrath, East of Eden, Tortilla Flat and many others.  But at the time, two of his works, “Cannery Row” and the “Log of the Sea of Cortez” were the most important to me because I was starting m business of collecting marine life in Panacea.

Long before I ever picked up the book, people were telling me I was Doc in Cannery Row.  Doc was a biologist who had a small commercial laboratory that sold pickled sea creatures, embalmed cats and rattlesnakes to schools and research laboratories.  Next door to “Western Biological” was a whore house, a sardine cannery, and a Chinese Grocery store.  Dock was a real person, Edward F. Ricketts, owner of Pacific Biological Laboratories and John Steinbeck was a partner at one point in time, and his wife Carole was Ed’s secretary.  Together Ricketts and Steinbeck wrote the Log of the Sea of Cortez, about their expedition into the Gulf of California to collect marine invertebrates and bring them back to study.  They were traveling around uncharted ground at the time in a purse seiner called the “Western Flier”

I read both books, and I was particularly interested in the difficulties they encountered with academia. At the time I was having my troubles with Florida State University, having just been booted out, and I wrote Steinbeck a letter telling him that things hadn’t changed since the book was written in 1941; that some of the professors were still antagonistic to individual scientific pursuits outside of the university and hostile to entrepreneur.  I was nineteen years old, my esteem was at its lowest point ever.  I didn’t expect an answer because I knew he got tons of mail, but it was the beginning of a long correspondence.  Through his letters, and during our visits John Steinbeck encouraged me to go on with my dream, to build Gulf Specimen Marine Lab and go on with my writing.

But one time when I was visiting him in New York, I complained about how hard it is to get published. He got angry, “Don’t give me that crap, Jack.  If you’re worth a damn you’ll get published; it may take a long time but sooner or later you will. And if you’re not, you won’t.”

Drawings from the Sea of Cortez Given to Jack by John