The Story of Jake and Blinky 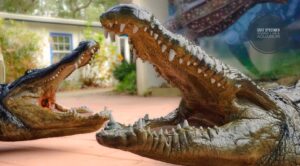 BATTLE OF THE TITANS

Gulf Specimen Marine Lab in Panacea, Florida is in the process of building a new exhibit, THE BATTLE OF THE TITANS. This is the story of two famous crocodilians, Jake and Blinky, who fought to the death and are now immortalized as fiberglass models. 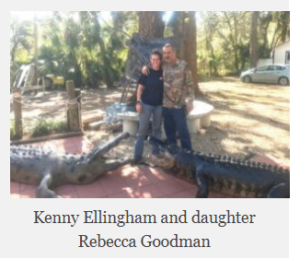 Jake the Crocodile was a wanderer. In 1957 he traveled 300 miles from the Florida Keys to Lake Tarpon in Central Florida, farther north than any other American Salt water crocodile on record. There two commercial fishermen accidentally caught him in their gillnet and called the Florida Fresh Water Fish and Game Commission. They relocated the eight foot reptile to the Homosassa Springs Wildlife Attraction and released him into their lagoon. There were 50 alligators there and he hated them all. Over the next twenty years, the big gray crocodile continued to grow and kept attacking them, sometimes inflicting major wounds.
Then came Blinky, a bull alligator with his own story. He was a superstar, perhaps the most famous alligator in Florida. Twelve feet long, he was the King of Lake Mirror in Lakeland, a ferocious warrior who had lost an eye and a front foot in battles with other gators. Oddly, he loved people and children gathered around to pet him. Although it was illegal, people came down to the lake to feed him his favorite food, marshmallows. One resident recalled, “Anytime he saw people, he would come out on shore like a pet dog.” 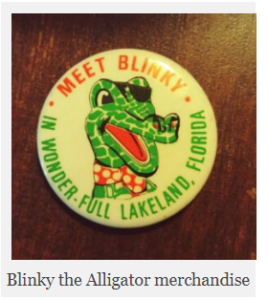 Blinky also made excursions into town. Cars would stop as the big gator lumbered across the highway and headed downtown to stroll along with shoppers. Residents recalled him sleeping beneath a park bench on which a drunkard was passed out. He was seen sleeping in front of the police station and occasionally hung out in front of Maas Brothers Department Store. Once he entered a church during a wedding, and was escorted back to the lake by motorcycle police officers coaxing him along with marshmallows.

In the 1970s, the Chamber of Commerce created an alligator costume with a long tail and an eye patch for the Christmas parade, and One-Eyed Joe, as he had been called for years, became “Blinky.” He was promoted as the world’s friendliest alligator. Blinky was to Lakeland what Mickey Mouse is to Disney.  There were Blinky billboards, tee shirts and buttons.

After a terrible tragedy in 1979 in which an eleven-foot alligator killed a teenager in a nearby town, the FWC became fearful that Blinky might do the same. One man wrote, “We’re talking about a cold-blooded reptile, not a cute little puppy.” The city commissioners, being Blinky fans themselves, considered several options. But placing chain-link fence around the lake sounded tacky, and extending a concrete wall around the lake to match the rest of the Lake Mirror Promenade would cost an arm and a leg. Blinky had to go.

The FWC came and captured him.  Even a professional alligator hunter often took hours or even days to catch a wild gator. Blinky came ashore hoping for marshmallows and popcorn, and they bagged him in ten minutes. Bound up, his snout taped shut, he was on his way to the Homosassa Springs Wildlife Attraction.

“Blinky arrived at Homosassa Springs attraction just after nine o’clock riding in the back of the attraction’s white pickup truck.  He had been carefully tied and his nose tapped for the trip and no time was wasted in bringing the gator back to the park where he was transferred to a cart and transported by J.P. Garner to Gator Lagoon.  Several park attendants helped lift Blinky out of the cart and to the banks of the Lagoon.  His legs were untied and his nose untapped and the giant saurian needed only a little push before he took the plunge into the cool waters of his new home.

“And how does Blinky like it at Homosassa Springs?  He seemed to be adjusting to his new environment just fine and is swimming happily around the lagoon, making the acquaintance of his fifty new alligator neighbors and Jake the fifteen-foot crocodile.  The residents of this Lagoon are fed approximately five hundred pounds of fresh fish and beef every week so Blinky will have his share of the feast.  J.P. Garner and everyone at Homosassa Springs would like to welcome Binky’s friends and Lakeland and everywhere around the state to visit him in his new home. “

The FWC was in an untenable situation since three people had been killed by alligators in the past five years, and dozen more were seriously wounded. The State had been keeping records of attacks since 1948 and saw the number escalate in the 1970’s. From 1973 to 2016 the human population in Florida swelled from roughly eight million people to twenty million and 24 people were killed by gators.

In the 1920’s steam shovels began draining the Everglades,  digging up wetlands and stripping away the native vegetation to build subdivisions and canals with sea walls. As more people moved in the alligators were seen as a nuisance, climbing fences, getting into swimming pools, crossing highways, taking up residence in golf course ponds, drainage ditches and retention pounds that had previously been swamp.

As increasing development caused water quality to decline, wildlife and fish became scarce, and hungry gators had a harder time finding food. Dogs, cats, plastics, tin cans and occasional humans were added to their menu. So in the end, the state’s fish and game department had no alternative but to move Blinky to Homosassa Springs Wildlife State Park to live out the rest of his days in peace. At least, that’s what the humans intended. Blinky the 12-foot alligator and Jake the 14-foot crocodile took an instant dislike to each other and began fighting.

The one eyed bull alligator was used to having his own way and was  more aggressive and agile than Jake. For a while he prevailed and chased the bigger Jake around the lake. The crocodile avoided him, hiding in the marshes, but Blinky kept hunting him. 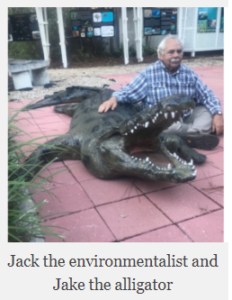 “Being king of that lake (Mirror) down there, I guess he figured he had to be king here, too,” said J.P. Garner, attractions manager at Homosassa Springs, to The Lakeland Ledger in April 1979. “So he started following Jake. Every minute, every day, he’d be looking for him.”

They were put in separate enclosures, but it wasn’t enough.  On the third night Blinky climbed over the fence and attacked Jake. Oooops! Jake ate Blinky to the great embarrassment of the park and the FWC who tried to hush it up, but word got out that park workers found only a few pieces of him remaining early the next morning. No doubt Jake was thinking, “Ooh! I can’t believe I ate the whole thing.” And Blinky had learned the truth behind the admonition, “Be careful what you wish for!”

Upon hearing the sad story, the residents of Lakeland grieved for their beloved alligator and built a monument to him on the shores of Lake Mirror where he had reigned as king for so many years.

Nearly twenty years later, in 1998, Jake died from a fungal infection. The park veterinarians worked diligently to save him, but all their efforts failed. At a massive 14’3” and 1003 pounds, Jake was the Crocodile King of Homosassa Springs Wildlife Park.

A local taxidermist made a cast of Jake so he could be remembered and reproduced in fiberglass models. The original model remains in the Homosassa Springs Wildlife Park today. Kenny Ellingham of Creative Wildlife in Lecanto,  Florida just made a new model from the original cast of Jake and created another model from a gator similar in size to Blinky to immortalize their famous battle in a new exhibit at  Gulf Specimen Aquarium  in Panacea, Florida. 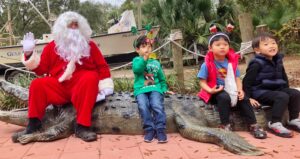 The models are now on display and our visitors are enjoying the opportunity to see an American saltwater crocodile and an American alligator, both fully grown. Children can climb on the monsters as they stand in opposition to each other.

Your donation is tax deductible. All donations here go towards funding our sea turtle rehabilitation program, repairs to existing exhibits, construction of new exhibits, conducting outreach and many more activities at the aquarium. Click on the link below labeled “Donate” to donate through Paypal.