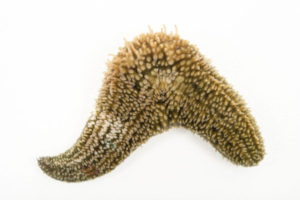 A practically indestructible mud-burrowing, thick-skinned holothurian that lives in a U-shaped burrow. Its bright red blood is a source of invertebrate hemoglobin. Recommended as a good laboratory dissection specimen. Doesn’t eviscerate. Size: 10-12 cm.

Their mouth is surrounded by 10 bushy tentacles that help them feed. Their radial areas are usually lighter than their inter radial areas which gives them a striped appearance (Hendler et al., 1995).

Can be found from New England to the coastlines of the Gulf of Mexico. They live in muddy or sandy areas near seagrass (Hendler et al., 1995).