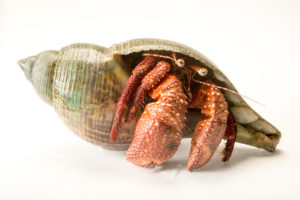 It is the largest species in the Western Atlantic. Its hairy red body, massive lobster like claws and bluish stalked eyes are a study in crustacean magnificence. Sporadic.

P. diogenes is omnivorous and has an unspecified variable diet that includes macroalgae and other invertebrates (Smithsonian, 2010). It has also been recorded to attack and feed on gastropods like conchs for both food and shelter (Iversen et al., 1986).