Now and then one comes upon a marine animal like the hermit crab that is really hardy. It can be kept in captivity and requires no babying, no worry about whether it will feed, and it comes encased in its borrowed snail shell. 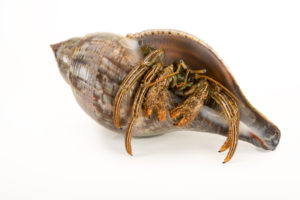 The hardiest of all species known in Gulf waters. They can live out of water for days, are vigorous, incorrigible feeders and have excellent visual responses. Their behavior and natural history have been widely studied. Frequents uppermost tidal horizons, often crawling up seawalls and tree stumps. Size: 6-10 cm. 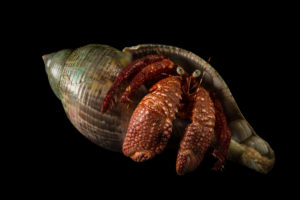 It is the largest species in the Western Atlantic. Its hairy red body, massive lobster like claws and bluish stalked eyes are a study in crustacean magnificence. Sporadic. 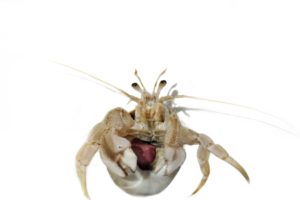 An an amusing, active species found in moon snail shells. Are prone to wearing cloak anemones (See Cn-270, Calliactis tricolor) whenever possible, and will steal them from each other in the aquarium. May emerge from shell if distressed, exposing its soft abdomen. Exhibits elaborate aggressive behavior; can be observed changing shells. Size of shell: 4-6 cm. 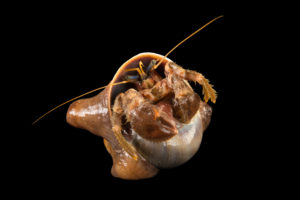 It’s claws are specially modified to inhabit fighting conch shells. They are an attractive, peaceful hermit found in deep water throughout the winter months.

A small, active hermit that starts scurrying about the minute it is placed in your aquarium. Highly aggressive among themselves, they afford the aquarist with many fascinating hours as they bluff, fight and swap shells. Some specimens often jump out of their shells when handled, exposing their soft abdomens. Experiments have shown that Pagurus can discriminate between yellow and blue painted shells. Size of shell: 2 cm. 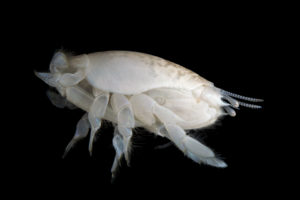 An active small anomuran crustacean living in the surf zone. It burrows vigorously through sand, disappears in seconds, and can be easily studied in the classroom. Size: 1-4 cm. 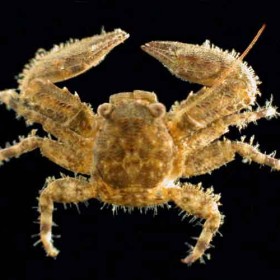 A banded, black anomuran crab that scurries about oyster clumps and sponges. Dorsoventrally compressed, it looks as if it were squashed with a hammer, enabling it to hide in crevices. Petrolisthes is a master of escape, camouflage and autotomizing. And it also is a magnificent filter feeder; it rhythmically waves its long flattened mouth parts like a barnacle sweeping the water. Size: 2-3 cm.